Added on Saturday, October 31, 2015 in Sweepstakes Round Ups

Already the last day of October! This means it’s Halloween but it also means we are turning the page on the 10th month of the year. On this month’s “Best Of” roundup: a Mysterious Mask appeared on Disney Channel, The Walking Dead is back with a new Sweepstakes, Newport Pleasure is still spinning the wheel, it’s till all good for AllState, and more!

Let’s have a look at what you liked the most this month! 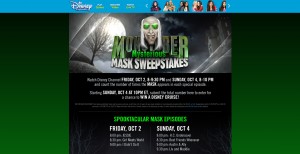 The Disney Channel Monstober Mysterious Mask Sweepstakes was a huge hit in October. During Disney Channel’s Spooktacular Premieres Weekend, they asked viewers to count the number of times the Mysterious Mask appears in each new creepstastic crossover and invited them to submit their total mask’s count for a chance to win a Disney Cruise!

AMC’s The Walking Dead Sleep With The Dead Sweepstakes

The AMC’s The Walking Dead Sleep With The Dead Sweepstakes is a must-see Sweepstakes! Four Weekly Entry Periods have passed already but you may still enter every Sunday for the next four weeks. To participate, tune in to AMC and look for the two code words during the new episode of The Walking Dead Season 6 starting at 9/8C then enter online at amc.com/SleepWithTheDead for your chance to sleep with the dead!

The Newport Wheel of Pleasure Sweepstakes will end at the end of the month of November so you still have a lot of time to play. Be sure to spin the wheel daily for another chance to win from over $250,000 in prizes including a 2016 vehicle, trips for two (2) to Las Vegas, NV or a Party Bus for a Day! Plus, you could be the winner of an iPhone 6, a 55? Samsung LED Curved 1080p Smart TV, a GoPro Hero 4 Action Camera and so much more!

The 2015 Allstate It’s Good Sweepstakes is also doing great and is one of the most popular Sweepstakes in October. This year, the second annual It’s Good Sweepstakes will give one lucky winner the chance to win $100,000 in cash plus, trips to both the Allstate Sugar Bowl Game taking place on Friday, January 1, 2016 at The Superdome in New Orleans, Louisiana AND the College Football National Championship Game taking place on Monday, January 11, 2016 at University of Phoenix Stadium in Glendale, Arizona!

Mtn Dew And Doritos Fuel Up for Battle Promotion

If you’re looking forward to find a PS4 console under the Christmas tree this year, you may have better change at winning one with the Mtn Dew And Doritos Fuel Up for Battle Promotion. Mountain Dew and Doritos are teaming up with PlayStation to bring the chance to win 1 of 50 consoles in this Promotion running until December 31, 2015. Good luck!

The hunting season is not closed yet and the Keystone Light Hunt For The Great White Stone Promotion is far from being over so keep looking for the Great White ‘Stone hiding in cases of Keystone Light and you could score backpacks, fleece jackets and gloves all this month!

The HGTV’s Don’t Hate, Renovate Sweepstakes is a classic from HGTV. With $50,000 in cash, toward home projects, up for grabs, it’s not a surprise to see it among the best Sweepstakes of October. And since it’s ending on November 21st, I’m pretty sure it will also be in the next Best Of Sweepstakes Roundup!