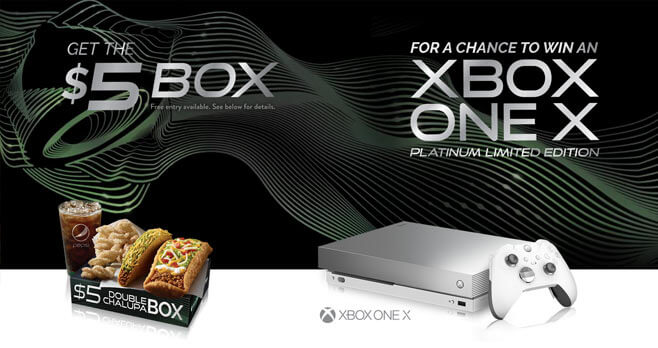 The Taco Bell Xbox One X Contest is offered only to legal residents of the 50 United States and the District of Columbia who are at least 18 years of age at the time of entry. The Sweepstakes begins at 12:00:00 AM PT on October 18, 2018 and ends at 8:59:59 PM PT on November 21, 2018. There is a limit of one Game Play per entrant per day via the Text Message method of Game Play and one Game Play per entrant per day via the Online method of Game Play during the Game Period. The grand prize consists of an Xbox One X Platinum Limited Edition, and Xbox Elite Wireless Controller – White Special Edition, an Xbox Game Pass 3-month membership and an Xbox Live Gold 3-month membership. Visit tacobell.com/xbox to enter and see Official Rules for details.