They are also running a photo contest where they are asking fans to stop by and share a photo of their favorite Creations on Twitter or Instagram for a chance to win trip to the New York City movie premiere of Batman V Superman: Dawn of Justice.

The Cold Stone Creamery Batman V Superman: Dawn of Justice Photo Contest runs from March 2, 2016 to April 19, 2016 and consists of two entry periods, as detailed below. 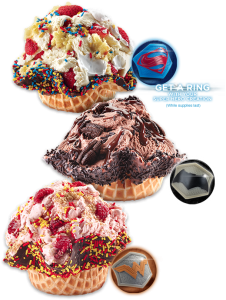 If you don’t have a Twitter/Instagram account or if you want to participate without making a purchase, visit coldstonecreamery.com/batmanvsuperman during the Contest Periods and follow the instructions to complete and submit the online registration form.

Regardless of method used to participate, you can receive only one total entry during the entire Contest Period.

Runner-Up Prize (3): A year’s supply of free ice cream, awarded in the form of a $250 Cold Stone Creamery Gift Card.