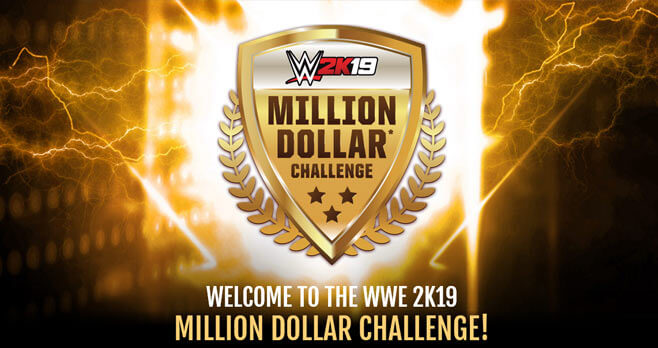 Enter the WWE 2K19 Million Dollar Challenge by sharing a video of yourself discussing how you will defeat AJ Styles in WWE 2K19 at 2k.com/milliondollarchallenge and you could win the opportunity to compete against AJ Styles for a chance to win $1,000,000.

The WWE 2K19 Million Dollar Challenge open only to legal residents of the 50 United States (excluding Arizona, Connecticut, Maryland, and North Dakota), the District of Columbia, Australia, Belgium, Canada (excluding Quebec), France, Germany, Great Britain, Ireland, Mexico, Netherlands, New Zealand, Portugal, Singapore, Spain, and Switzerland, who are at least 18 years of age and have attained the age of majority in their state, country or province of residence. The Sweepstakes begins at 12:00:01 AM ET on October 9, 2018 and all Submissions must be received by 11:59:59 PM ET on January 31, 2019. Limit one Submission per person/per Gamertag or PSN ID. The grand prize consists of the opportunity to compete against AJ Styles for a chance to win $1,000,000. Visit 2k.com/milliondollarchallenge to enter and see Official Rules for details.