First, remember it’s Black Friday? Use promo code “DEAD15” for 15% off the best Walking Dead products the TWD Official store! Secondly, for one day only, tell AMC if you’re counting down the days until the TWD’s Mid Season Finale and you could win a Daryl Christmas Stocking and a Daryl Ornament in The Walking Dead #TWDBlackFriday Giveaway! Something even Santa will be jealous of! 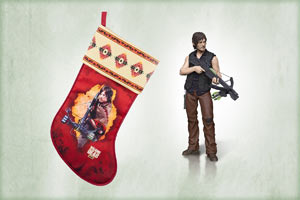 Want to enter the The Walking Dead #TWDBlackFriday Giveaway? Of course you do! Follow @WalkingDead_AMC on Twitter (if you aren’t already!) and look for the #TWDBlackFriday tweet that was posted earlier today. Simply retweet it between 9:00 a.m. ET and 11:59 p.m. ET and you could score 1 of 10 Grand Prizes.

To make things easier for you, we include the promotional tweet right below:

I’m dying to see the #TWDMidSeasonFinale this Sunday at 9|8c. RETWEET if you’re counting down during #TWDBlackFriday. #Sweeps

Open to legal residents of the fifty (50) United States and the District of Columbia who are 18 years or older at the time of entry and who have a Twitter account, except where prohibited or restricted by law.

Want more chances to win? Watch The Walking Dead this Sunday at 9/8c on AMC for two code words and a chance to sleep within the walls of Alexandria!