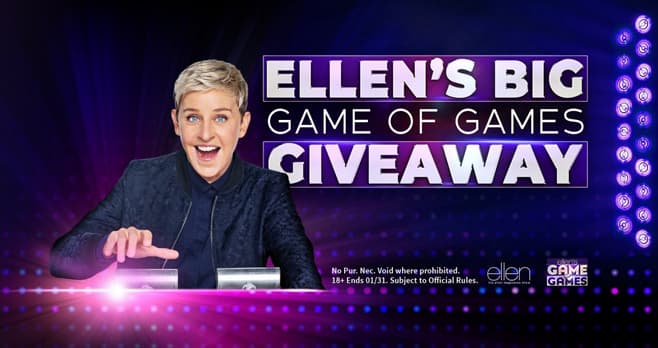 The NBC Ellen’s Big Game of Games Giveaway is open only to permanent, legal United States residents who are physically residing in one (1) of the forty-eight (48) United States or the District of Columbia (excluding Alaska, Hawaii, Puerto Rico, Guam, the Virgin Islands and other United States territories), and who are eighteen (18) years of age or older and of the age of majority in their state of residence as of the start of the Sweepstakes Period. The Sweepstakes begins on January 3, 2019 at 12:00 P.M. PT and end on January 31, 2019 at 4:00 P.M. PT. You may enter once per day during the Sweepstakes Period for a total of twenty-nine (29) Entries during the entire Sweepstakes Period. The grand prize consists of one (1) trip for Winner and one (1) guest to Los Angeles, California to attend a taping of The Ellen Show. Visit www.nbc.com/ellens-giveaway to enter and see Official Rules for details.

Hi Ellen Happy Holiday youre a wonderful person. I wanted to be on your show during the Christmas holiday show but unfortunately I am from New yjork.