Added on Monday, December 19, 2016 in Daily Entry Sweepstakes, Other Sweepstakes 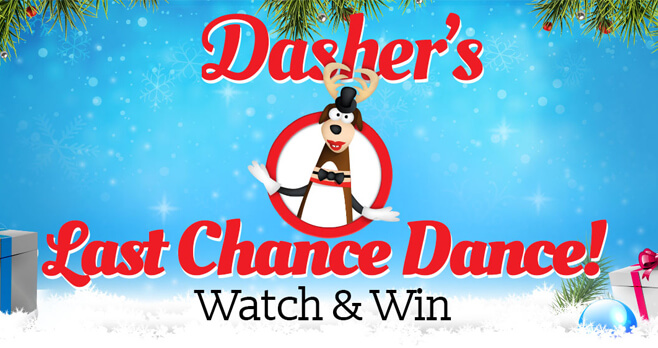 Ellen DeGeneres is not done with the 12 Days of Giveaways 2016 yet! Starting this Monday, watch The Ellen DeGeneres Show to find out what was happening on the Ellen Show when Dasher danced across the screen. Then, go online to EllenTV.com/Dasher and select the correct answer. You will be automatically entered into the Ellen And Dasher’s Last Chance Dance! Sweepstakes.

One very lucky viewer will win a prize package of all of 12 Day’s gifts given to The Ellen DeGeneres Show’s live studio audience during the 12 Days Of Christmas. A grand prize package worth up to $36,000!

Starting on December 19, 2016, watch The Ellen DeGeneres Show. During each episode of the Show during the Contest Period, Dasher will be dancing on the screen as a lower third. Then, in order to enter the Ellen And Dasher’s Last Chance Dance! Sweepstakes, you must go to the Ellen Contest webpage located at www.ellentv.com/Dasher during the Contest Period and follow the steps below:

What Was Happening On The Show When Dasher Danced Across The Screen?

Ellen And Dasher’s Last Chance Dance! Sweepstakes: What You Need To Know

The Ellen And Dasher’s Last Chance Dance! Sweepstakes is open to individuals who are 18 years of age or older and are legal residents of the 50 United States or the District of Columbia (excluding Puerto Rico, Guam, American Samoa, United States territories, possessions, and protectorates, foreign based United States military installations and wherever restricted or prohibited by law).

Would love to win. Would share with my family. So many are worse of than I am but winning would be nice.
Good luck to all.

Would love to win.Would share with my family and special friends.Good luck to all.

I would love to give to my son and his wife because they really have nothing. Good luck all!

It would mean the world to my daughter and I if we win the 12 days of giveaways. One thing for certain it would be an awesome Christmas 2016. Good luck to everyone!!

Would love to meet Ellen. Would donate the gifts. Meeting Ellen would be aaaaah-mazing!

Love you Ellen and all you do for humanity and if I’m lucky enough to win I would share with those less fortunate than myself. “Be kind to one another!” To give is always better than to receive and it makes me feel good to help others. Thank You! Happy Holidays to you, Portia, your woofs & both your families.

Love you Ellen and guest Martha S snoop D and others

Love snoop and Martha and you Ellen

Love snoop and Martha and you Ellen. I’d love to win but I never win a damn thing ever never ever ever

Hi Ellen! I would be honored to win. Call me!

Ellen, I retired from the Illinois Army National Guard after 41 years of service. Would love to win. Love your show!!

Hi Ellen! I love you Ellen and your show! I have been watching you since your sitcom “Ellen”. You are hilarious! I was so happy for you, when you met Portia and got married! I would love to win your 12 days of giveaways! I am not very computer literate and I am not sure if I even filled out the form correctly. I also have a bad back, so I can totally relate when your back goes out and you cannot dance that day! Do whatever you can to avoid surgery! I have had 2 back related injuries due to lifting patients, working as a RN. I have also had 2 low back failed fusions, and am currently on SSI and LTD. I would have been better offf, if I never had surgery at all! God Bless to you and Portia! Happy New Year to all!