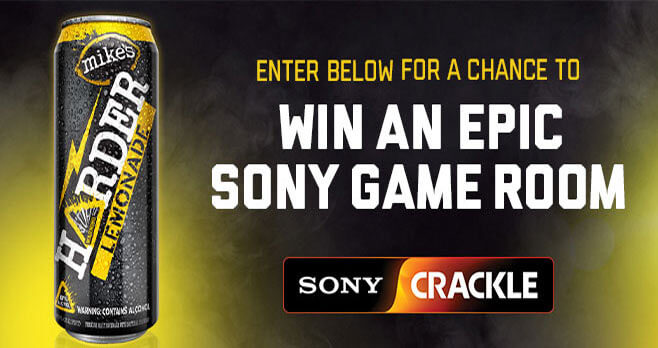 Sony Crackle and Mike’s Harder are teaming up to bring you the Epic Sony Game Room Sweepstakes. Enter daily through December 9 and you could win an epic Sony game room setup valued at over $2,500.

The Epic Sony Game Room Sweepstakes is open only to legal residents of the fifty (50) United States (including District of Columbia) who are at least twenty-one (21) years old at the time of entry. The Sweepstakes begins on October 1, 2018 at 12:00 a.m. PT and ends on December 9, 2018 at 11:59 p.m. PT. Each entrant may enter one (1) time per day by any method or combination of methods of entry during the Promotion Period. The grand prize consists of PlayStation4 Pro; two (2) PS4 Games (ESRB rated “Mature 17+”); 2.1ch Soundbar with Wi-Fi/Bluetooth Technology HT-CT800; 4K ultra HD Blu-Ray Player UBP-X700; PlayStation VUE CORE Subscription for one (1) year (at end of 1 year period subscription will expire and must be renewed by winner at his/her sole expense); and 49” X900F 4K Ultra HD Smart TV. Visit sonycrackle.promo.eprize.com/epicgameroom to enter and see Official Rules for details.