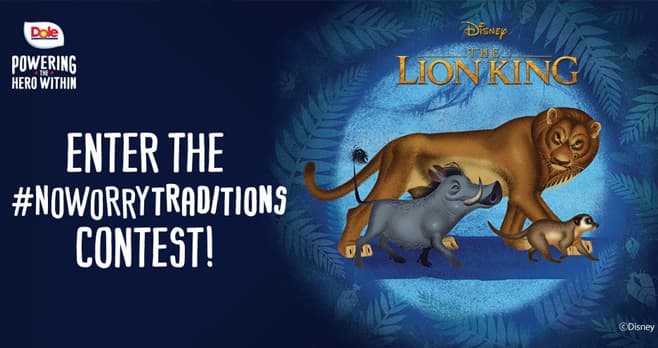 Dole Contest: To celebrate Disney’s The Lion King, you are invited to enter the Dole #NoWorryTraditions Contest on Twitter, Instagram, or Facebook for a chance to win an Hawaiian vacation to AULANI Disney Resort and Spa in Oahu, Hawaii.

The Dole #NoWorryTraditions Contest is open only to legal residents of the fifty (50) United States (including the District of Columbia) and Canada who are at least eighteen (18) years old at the time of entry.  The Sweepstakes begins on July 1, 2019 at 12:00 a.m. ET, ends on August 4, 2019 at 11:59 p.m. ET. Each entrant may tweet/post/comment one (1) Submission per Weekly Entry
Period, per eligible social media channel, during the Contest Period. The grand prize consists of a 5-Day/5-Night vacation package to AULANI Disney Resort and Spa in Oahu, Hawaii. Visit dole.com/disney to enter and see Official Rules for details.