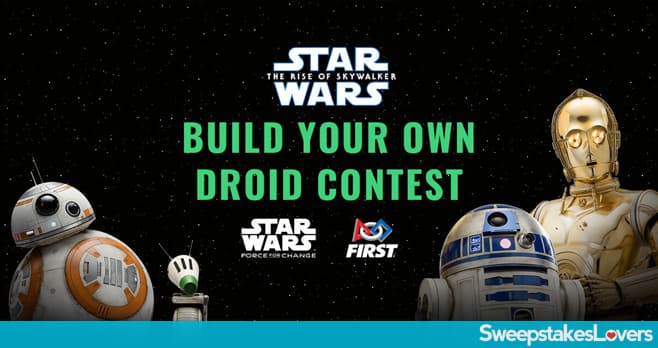 Enter the Star Wars Build My Droid Contest at buildmydroidcontest.com for a chance to have your droid physically created and included in an upcoming Star Wars Project. You could also win a trip for 2 to the World Premiere of Star Wars: The Rise Of Skywalker.

Eligibility : THE CONTEST IS OPEN TO LEGAL RESIDENTS OF THE 50 UNITED STATES AND DISTRICT OF COLUMBIA, WHO ARE SIXTEEN (16) YEARS OF AGE AND OLDER AT THE TIME OF ENTRY.

Limit : There is a limit of one (1) Entry per person in the Promotion.

ONE (1) GRAND PRIZE: Sponsor will create an actual droid inspired by the Grand Prize winner’s Entry, to be used in a future Star Wars project; and the Grand Prize winner will also receive one (1) trip for two (2) (Winner and one (1) guest to Hollywood, CA, U.S.A. to attend the “Star Wars: The Rise of Skywalker” premiere. ARV of Grand Prize: $3,000.00 USD.