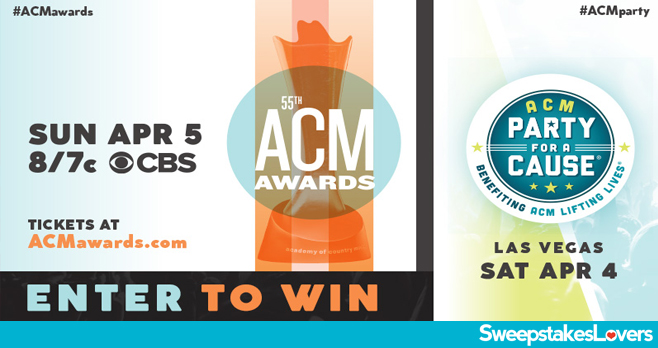 Enter the SiriusXM ACM Awards Sweepstakes at siriusxm.com/ACM for a chance to win a trip to the 55th Academy of Country Music Awards.

Limit : LIMIT ONE ENTRY PER PERSON AND ONE PER HOUSEHOLD.

One (1) Grand Prize will be awarded, consisting of: (a) round-trip coach air transportation for two (2) to Las Vegas, NV, from a major commercial airport in the continental United States (i.e., excluding Hawaii and Alaska), nearest to winner’s primary residence provided that Sponsor reserves the right to substitute ground transportation for air transportation if winner resides within 150 miles of the Destination; (b) one (1) hotel accommodation for three (3) nights at the MGM Grand Hotel (one double occupancy room and room tax only) checking in on Friday, April 3, 2020 and checking out on Monday, April 6, 2020; (c) two (2) tickets to the ACM Party for a Cause: ACM Lifting Lives Topgolf Tee-Off at Topgolf Las Vegas on Saturday, April 4, 2020; (d) two (2) passes to ACM Party for a Cause: ACM Beach Bash Presented by Dr. Pepper Benefiting ACM Lifting Lives at Mandalay Bay Beach, Mandalay Bay on Saturday, April 4, 2020; (e) two (2) passes to ACM Awards rehearsals on Saturday, April 4, 2020 (subject to venue policies and the availability of open rehearsals); (f) two (2) tickets to the 55th ACM Awards on Sunday, April 5, 2020 at MGM Grand Garden Arena; and (g) ground transportation to and from the airport on-site in Las Vegas. Total Approximate Retail Value: $3,200.