Twenty five other prize winners will receive a pair of Fandango movie tickets to see The Divergent Series: Allegiant.

How To Participate At Seventeen.com/Allegiant

If you want to subscribe, go to seventeen.com/allegiant, simply fill out the Sweepstakes entry form by providing your contact information and submit. You will automatically get 1 FREE issue to Seventeen Magazine and be entered into the Sweepstakes.

If you do not want to get a free trial, look for the “click here” link located at the top of the entry form to access the free alternate method of entry, as shown below. 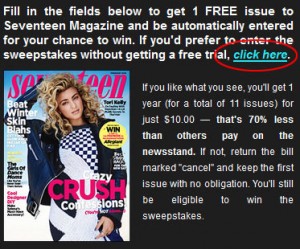 Then follow the instructions to complete and submit the registration form to receive one entry into the Sweepstakes.

Regardless of method of entry, only one Sweepstakes entry per participant will be accepted during the Promotion Period. All entries must be completed and received by 11:59 PM ET on February 8, 2016 to be eligible for the prize drawing.

Attend The Movie Premiere Screening Of The Divergent Series: Allegiant

The Grand Prize consists of a trip for two (2) to New York City to attend the movie premiere screening of The Divergent Series: Allegiant in March of 2016. The trip includes to following:

Sweepstakes open only to legal residents, between the ages of 13 and 29 at the time of entry, of the 48 contiguous United States and the District of Columbia.