To enter, you must show your creative side and prove that you’re the biggest Gold Rush Superfan using one of the following method.

Please note that for each method of entry, you must first take a photo or video of yourself proving you’re the biggest Gold Rush superfan then :

Limit.
There is a limit of one (1) entry per person regardless of the method of entry. 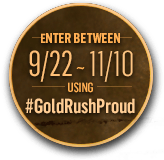 Eligibility.
Participation into the contest is open only to legal residents of the fifty (50) United States or the District of Columbia; who are at least 18 years of age, who have a computer with Internet access or mobile device that can access the Internet and uses either the iPhone or Android platform; and have a valid Facebook.com, Twitter.com or Instagram.com account.

Prize Details.
One (1) grand prize winner will be awarded a trip to The Dirt set in Washington, D.C. and the opportunity to meet some of the  miners and be featured on the show. Approximate Retail Value of the grand prize is $2500.00.