Just a few weeks left before you can see The Hunger Games: Mockingjay – Part 2, opening in theaters on November 20th. In order to promote the movie, Fandango is running a Sweepstakes where you could win a flyaway trip to attend the world premiere of The Hunger Games in StageAround at Wembley Theatre in London, England!

During the month of November, you may enter Fandango’s The Hunger Games: Mockingjay – Part 2 Sweepstakes using one of the following (2) ways:

Regardless of method of entry (with purchase or without purchase), you are limited to a maximum of ten (10) entries during the entire Sweepstakes Period. All entries must be completed and received by 10:00 a.m. PT on November 23, 2015 to be eligible for the Grand Prize Drawing.

Fandango’s The Hunger Games: Mockingjay – Part 2 Sweepstakes is open only to legal residents of forty-nine (49) states of the United States and the District of Columbia who are at least eighteen (18) years of age (or the age of majority in their state of residence, whichever is older) as of October 22, 2015. Void in Rhode Island, Puerto Rico, all U.S. territories and possessions and all overseas military installations. 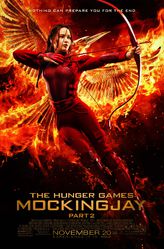 The Hunger Games: Mockingjay – Part 2 brings the Hunger Games franchise to its powerful final chapter in which Katniss Everdeen [Jennifer Lawrence] realizes the stakes are no longer just for survival – they are for the future. With the nation of Panem in a full scale war, Katniss confronts President Snow [Donald Sutherland] in the final showdown. Teamed with a group of her closest friends – including Gale [Liam Hemsworth], Finnick [Sam Claflin] and Peeta [Josh Hutcherson] – Katniss goes off on a mission with the unit from District 13 as they risk their lives to liberate the citizens of Panem, and stage an assassination attempt on President Snow who has become increasingly obsessed with destroying her. The mortal traps, enemies, and moral choices that await Katniss will challenge her more than any arena she faced in The Hunger Games.