Added on Wednesday, June 17, 2015 in Other Entry Sweepstakes, Travel Sweepstakes

Hit the waves with me. Find a key in #Cheetos bags and you could win a beach vacation. More at http://t.co/OlaWLf7jzF pic.twitter.com/lE5kHeWpeu

Plus, enter the sweepstakes online at summer.cheetos.com for a chance to win flamin’ hot prizes including Video Game Consoles, Tablets, Wireless Speakers and more!

Frito-Lay’s Cheetos will be giving away over $39,000 in prizes in the Chester’s Flamin’ Hot Summer Promotion so try the new Mix-Ups Flamin’ Hot & Cheezy flavor today and be sure to look for the key inside the bag!

During the Promotion Period, as detailed below, purchase any specially-marked bag of CHEETOS. If you find one of the two Winning Keys inside your bag, you automatically win one of the two Grand Prize. Alternatively, you may also participate without making a purchase by hand printing your contact information such as your name, complete mailing address, and date of birth on a 3″ x 5″ piece of paper and mailing it to: Chester’s Flamin’ Hot Summer Grand Prize Game Play Request, P.O. Box 760008, Dept. 881-743, El Paso, TX 88576-0008, to be postmarked by August 10, 2015 and received by August 17, 2015. 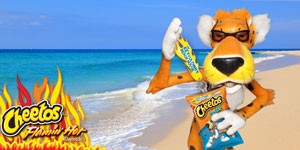 Two (2) lucky Grand Prize Winners will receive a trip for four (4) to their choice of San Diego, California; Laguna Beach, California; or Destin, Florida (airfare, rental car for six days and $1,000 spending money included) where they will have the opportunity to enjoy a five (5) nights stay in a beach house! Each grand prize is valued at $15,000.

For a chance to win a daily prize, complete and submit the registration form available online at summer.cheetos.com and you’ll be automatically entered into the applicable daily random drawing.

Editor’s Advice: Share the Sweepstakes on Twitter using #CheetosEntry to earn one (1) bonus entry into the applicable daily random drawing.

Over 70 daily prizes, one per day, are available to be won during the Promotion Period, as listed below: