Carl’s Jr. got your back, and your stomach! They’ve teamed up to Call of Duty: Black Ops III to bring you the Ultimate Care Package, a Tex Mex Bacon Thickburger and a chance to win Call Of Duty: Black Ops 3 prizes like an epic in-game weapon camo! Plus, enter online at CarlsJr.com/CallOfDuty and you could win the grand prize of a trip for two to L.A., California (airfare and hotel accommodations included) for an ultimate tour of Treyarch Studios, the birthplace of Call of Duty: Black Ops III!

Grab an #UltimateCarePackage for a chance to win an epic trip to @Treyarch studios: https://t.co/oZiFsICLzg. pic.twitter.com/9NSt7wU1Kb

Carl’s Jr. will be giving away more than $4,000,000 worth of prizes in the Call of Duty: Black Ops III Instant Win Game And Sweepstakes so play now for your chance to win over 3 millions prizes, including exclusive Black Ops III in-game rewards, COD Black Ops III Games, Messenger and Duffle bags, Flashlights, Tactical Eyewears, and many other great prizes! 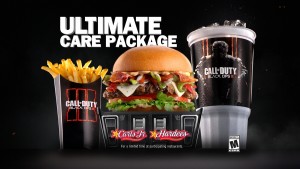 Editor’s Advice: Bring this coupon to your local Carl’s Jr. restaurant to get $1 off any size Tex Mex Bacon Thickburger Combo.

Carefully peel-off the label affixed to your Call of Duty drink cup and look for the 9-digit code then, enter this code at CarlsJr.com/CallOfDuty to be automatically entered into the Sweepstakes and see if you’re an instant prize winners. You could instantly win one one of millions of prizes from Call of Duty, Carl’s Jr. and 5.11 tactical gear, as listed below:

Be sure not to throw away the other part of the peel-off label has it may contain one of the following food offers, redeemable in-store:

Please note that all food offers and instant win prizes must be claimed by December 31, 2015 while all prize codes must be submitted online by no later than 6:00 pm EST on January 4, 2016 to be eligible for the Sweepstakes Grand Prize Drawing.

The Carl’s Jr. Call of Duty: Black Ops III Instant Win Game And Sweepstakes is open to legal residents of the United States and Washington D.C., excluding Rhode Island, Puerto Rico, and all other U.S. territories, and where restricted or prohibited by law, who have reached the age of (18) eighteen in their state of residence by October 21, 2015.