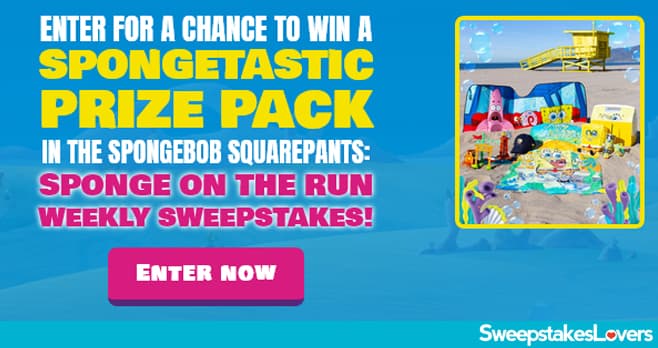 SpongeBob SquarePants Sponge On The Run Weekly Sweepstakes at WheresGaryGetaway.com is your chance to win a SpongeBob Summer Essentials Prize Pack.

You can also enter the Where’s Gary Getaway Instant Win Game and Sweepstakes 2020 for your chance to win a 2021 tropical stay in the Pineapple Suite.

Eligibility : This Nickelodeon Sweepstakes 2020 is open only to individuals who are (i) legal residents of one of the fifty (50) United States, the District of Columbia, Puerto Rico, the U.S. Virgin Islands, or any other territory or possession of the United States, and (ii) at least eighteen (18) years of age or the age of majority in the jurisdiction in which he/she resides (nineteen [19] years of age in Alabama and Nebraska, twenty-one [21] years of age in Mississippi and Puerto Rico) at the time of entry.

This is awesome!My grandchildren would love this!