You may also play without making a purchase by calling toll-free 1-866-861-4528 and following the automated instructions to play for a chance to win a prize.
If you are a winner of a prize, you will hear a voice message indicating that you have won.

There is a limit of one (1) Game Play per day/person/email address/phone number, for a maximum of up to eighty (80) entries, regardless of method of playing.

To be eligible to play the game or win, entrants must be legal residents of any of the 50 United States or District of Columbia, who are 13 years of age or older at the time of participation.

A total of 7,680 prizes will be awarded (one awarded for every fifteen minutes of the Game Period) and each prize consists of one (1) Skylanders High Five character.
Approximate Retail Value of each prize is $9.99 each.
Total ARV of all prizes is $76,723.20. 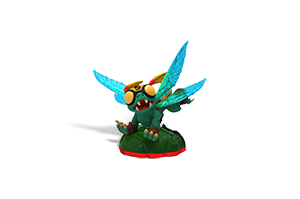 Growing up, High Five was one of the most skilled sky racers of all the dragonflies.

But as the fifth son of the Royal High Flying Dragonflies, he was not allowed to enter any of the racing tournaments that took place each year because of his age. Instead he was forced to watch from the sidelines as his four older brothers competed for the coveted Trophy of Sparx, which legend has said holds magical properties. One year, during the biggest racing event of the season, High Five learned that the Troll Racing Team had stolen the valuable trophy and were going to use the race to cover their escape. He quickly took action, jumping into the race and using his amazing flying skills to weave and dodge his way to the front of the pack, where he caught up to the trolls and brought them down. For his actions, High Five was given the Trophy of Sparx. Even more importantly, he was made a Skylander, where he now helps protect Skylands from any evildoers!