Calling all 5SOS fans! Now that you got your hands on “Sounds Good Feels Good“, would you like to get your hands on a Fender guitar signed by 5 Seconds Of Summer too? For your chance to win, show Claire’s how good you are at air guitar by sharing a pic or a video on either Twitter or Instagram using #5SOSAirGuitarSweepstakes and you could be the lucky winner of the 5SOS Air Guitar Sweepstakes!

Share your best air guitar pose with us for a chance 2 #WIN a SIGNED @5SOS guitar! #5SOSAirGuitarSweepstakes pic.twitter.com/YQvRrbHkm5

Share Your Best Air Guitar Pose With #5SOSAirGuitarSweepstakes To Win

You probably did some air guitar while listening to your favorite 5SOS songs already. Now it’s time to show off your skills! From now until November 5th, snap a photo or record a video of your best air guitar pose then share it on Instagram or Twitter to be entered into the Sweepstakes. Don’t forget to including the hashtag #5SOSAirGuitarSweepstakes and tag @clairesstores in your post to be eligible. You can enter only once so be sure to make it count!

Not sure about your pose? Check out what other entrants shared on Twitter below:

The Claire’s 5SOS Air Guitar Sweepstakes is open only to legal residents of the fifty (50) United States or the District of Columbia and Canada (excluding Quebec), who are at least thirteen (13) years old at the time of entry and have a valid Instagram or Twitter account. 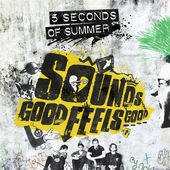 5 Seconds Of Summer’s second studio album, Sounds Good Feels Good, was released on October 23, 2015. If you don’t have it already, visit your local Claire’s store and pick up your copy along with cool 5SOS merch!