Sweepstakes from TODAY, Scholastic, Calvin Klein, and iHeartRadio. Prizes includes a family trip to Universal Studios Hollywood, a trip for four to Kennedy Space Center in Florida, tickets to a Justin Bieber Purpose Tour concert, and a trip to the 2016 Radio Disney Music Awards.

Are you ready for your daily dose of Sweepstakes?

Below are some of the best online Sweepstakes we saw today.

Only legal residents of the 48 contiguous United States and the District of Columbia who are 18 years of age or older are eligible to enter. Online entries will be accepted between April 7, 2016 and April 13, 2016. A participant can enter once per day during the Promotion Period. Read all the details here.

Scholastic and The Angry Birds Movie are teaming up to bring you Scholastic’s Angry Birds Parent Sweepstakes, a promotion where you and your family could win an out of space trip to Kennedy Space Center in Florida. All you have to do is submit a video or photo depicting what makes your family unique at scholastic.com/angrybirdsmovie.

Open to legal residents of the 50 United States and Washington, D.C. who are over the age of 18 at the time of entry. Submission period starts on April 11, 2016 and ends on May 21, 2016. Only one submission per entrant will be accepted. 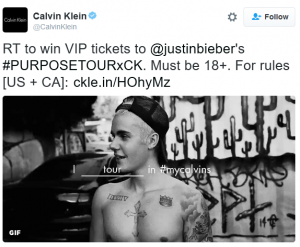 All this month, follow @CalvinKlein on Twitter and look for promotional tweets that includes the hashtag #PURPOSETOURxCK. Retweet them and be automatically entered for a chance to win VIP tickets to see Justin Bieber LIVE during his Purpose Tour (airfare and hotel accommodations included).

Open only to legal residents of the 50 United States, the District of Columbia and Canada (excluding the Province of Quebec) who are at least 18 years old at the time of entry. Limited to 1 entry per day during the Promotion Period. The first entry period runs between April 6 and April 13 while the second entry period commences on April 18 and is scheduled to end on May 1, 2016. Check out the official rules for all details.

Open only to individuals who are legal residents of the 50 United States or the District of Columbia, who are at least 18 years of age or older. Ends at 1:00 PM ET on April 18, 2016.