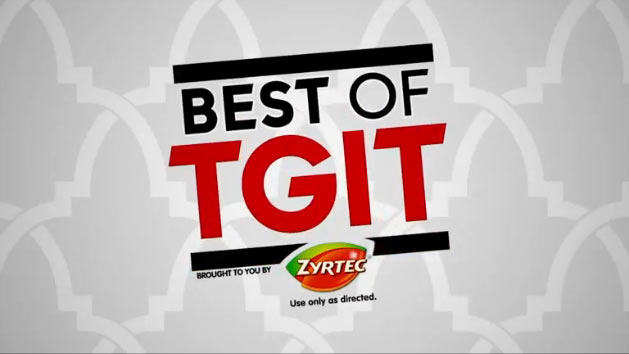 TGIT on ABC is a red hot, powerhouse, smash hit. But are you ready to vote in the Best Of #TGITSweepstakes? Every Thursday night, vote for the Best Of TGIT clip on Twitter using #TGITSweepstakes and you could win a Best of TGIT Prize Pack containing ABC Shows branded items and a $250 Amazon.com gift card. Ten weeks. Ten winners. And you could be next.

How To Enter The Best Of #TGITSweepstakes

Each week, tune in to ABC starting at 8:00 pm and watch TGIT THURSDAYS on ABC. After the shows, go online to BestOfTGIT.com to find what are the weekly “Best Of TGIT” clips. Once you have chosen your favorite, tweet your vote on Twitter using #TGITSweepstakes and one of the following hashtags: #ChooseGreys; #ChooseScandal; #ChooseHTGAWM or #ChooseCatch.

What Are The Sweepstakes Periods

To find out who are the Best Of #TGITSweepstakes winners, send a self-addressed, stamped envelope, to be received by June 30, 2016, to : The Best of TGIT Sweepstakes Winners, c/o LeadDog Marketing Group, 440 9th Avenue, 17th Floor, New York, NY 10001.

The ABC Best Of #TGITSweepstakes is open only to legal residents of the 50 United States and Washington D.C. Participants must be at least 18 years of age or the age of majority in the jurisdiction of their residence, whichever is older. Participants must also have a Twitter account as of March 15, 2016.