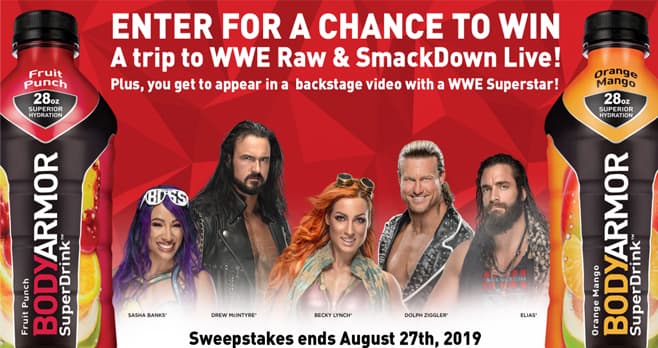 WWE BODYARMOR Sweepstakes: WWE and BODYARMOR are teaming up to one lucky wrestling fan on a trip to WWE Raw and SmackDown Live. Plus, you get to appear in a backstage video with a WWE Superstar. Enter now at wwe.com/BODYARMOR.

The WWE BODYARMOR Sweepstakes is open only to legal residents of the forty-eight (48) contiguous United States, who are at least twenty-one (21) years old when they enter the Sweepstakes. The Sweepstakes begins at 10:00 AM (ET) on August 5, 2019 and ends at 11:59 PM (ET) on August 27, 2019. Limit one (1) entry per person per day during the Sweepstakes Entry Period. The grand prize consists of two (2) tickets to WWE SmackDown Live currently scheduled for September 10, 2019 at Madison Square Garden in New York, New York; two (2) tickets to WWE Monday Night Raw on September 9, 2019 also at Madison Square Garden, round-trip economy class air transportation for the Grand Prize Winner and one (1) guest between major commercial airport near Winner’s permanent residence and the Event City; two (2) nights hotel accommodations (one (1) standard rooms, double occupancy/hotel designated by Sponsor); ground transportation between airport and hotel; and an opportunity to be featured in a WWE video. Visit wwe.com/BODYARMOR to enter and see Official Rules for details.