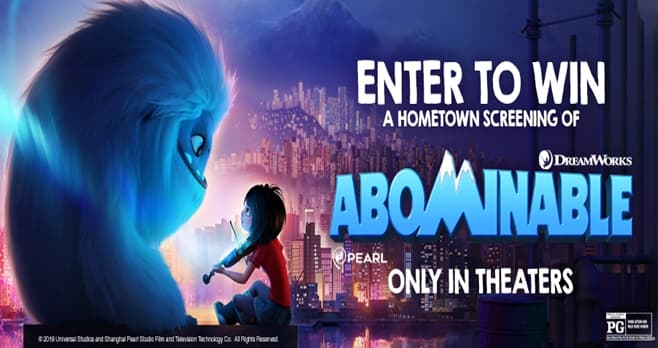 Enter now at LittleDebbie.com/AbominableGiveaway and you could win a hometown private screening of ABOMINABLE.

The Little Debbie Abominable Giveaway is open to all legal residents of the forty-eight (48) contiguous United States and the District of Columbia who are at least eighteen (18) years or older (nineteen (19) years or older for Alabama and Nebraska residents) at the time of entry. The Sweepstakes begins on Monday, August 19, 2019 at 12:00 PM ET and ends on Monday, October 14, 2019 at 11:59 AM ET. There is a limit of one (1) entry per person per twenty-four (24) hour period per household during the Giveaway Period. The grand prize consists of a private screening of the animated feature motion picture “ABOMINABLE”, which is scheduled for release in September 2019, for up to two hundred (200) people in the Grand Prize Winner’s hometown. Visit littledebbie.com/abominablegiveaway to enter and see Official Rules for details.