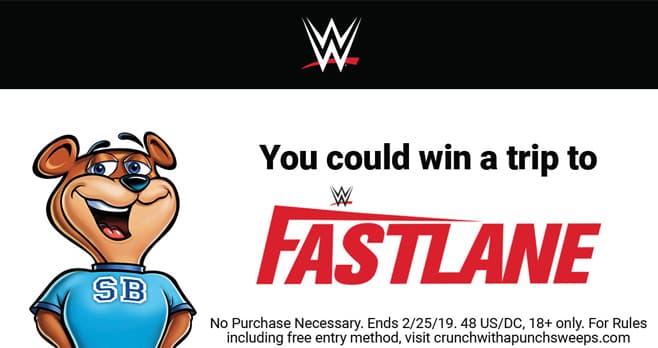 The Golden Crisp Crunch With A Punch WWE Sweepstakes is open only to legal residents of the forty-eight (48) contiguous United States and the District of Columbia who are at least eighteen (18) years old at the time of entry. The Sweepstakes begins on January 28, 2019 at 12:00 PM ET and ends on February 25, 2019 at 11:59:59 PM ET. Regardless of the method of entry, there is a limit of one (1) Entry per person per day and one (1) Bonus Entry during the entire Sweepstakes Period. The grand prize consists of a three (2) day, two (2) night trip for two (2) people to attend WWE Fastlane in Cleveland, Ohio on March 10, 2019. Visit www.crunchwithapunchsweeps.com to enter and see Official Rules for details.