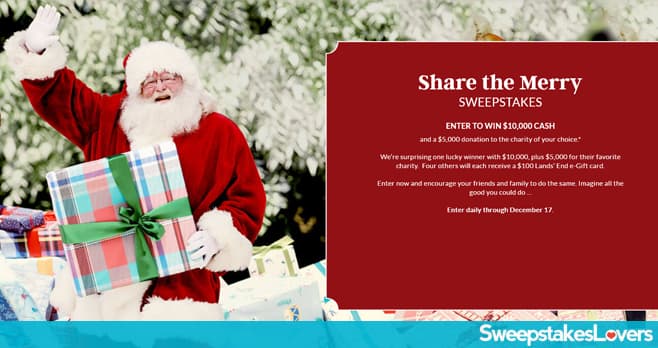 Lands’ End Sweepstakes 2019: Enter the Lands’ End Share the Merry Sweepstakes at landsend.com/share-the-merry for a chance to win $10,000 for you and a $5,000 donation to the charity of your choice. Plus, a $100 Lands’ End e-Gift card just in time for Christmas.

Eligibility : This Lands’ End Sweepstakes is open to legal residents of the 50 United States (excluding Puerto Rico) at least 18 years of age (except Alabama and Nebraska 19 and Mississippi 21) at the time of Promotion registration; and Canadian residents (excluding Quebec), that have reached the age of majority in the Province in which they reside by the start of this Promotion.

Limit : Limit of one (1) Sweepstakes Entry per person, per email address, per day throughout the Promotion Period.

One (1) Grand Prize will be awarded, consisting of:

A total of four (4) Weekly Prize Winners will be awarded, as detailed below: