Starting on February 24th, Carl’s Jr. invites you to celebrate their 75th Anniversary for a chance to win a Classic ’75 Corvette customized by Danny and his crew from History’s Counting Cars in the CarlsJr.com 75th Anniversary Sweepstakes.

To participate, buy a large Coca-Cola and enter the 8-digit code printed on the cup at carlsjr.com. Carl’s Jr. will give away a total of 155 prizes including a 1975 Chevrolet Corvette and other prizes from Coca-Cola and Carl’s Jr. Don’t miss your chance to win from over $120,000 in prizes. Visit your local Carl’s Jr. starting on February 24 for a chance to win.

How To Enter The CarlsJr.com 75th Anniversary Sweepstakes

To enter a code, each participant must visit the sweepstakes website at carlsjr.com and register for the sweepstakes by providing their first name, last name, street address, city, zip code, state of residence, phone number, date of birth and email address along with a valid code.

Each unique code can be used only once and all codes must be entered by no later than 11:59 pm PDT on April 5, 2016 to be eligible for the random drawing that will be held on or about Monday, April 25, 2016. 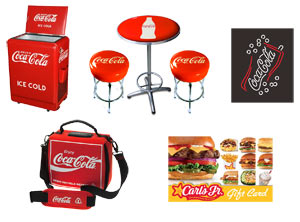 The Carl’s Jr. 75th Anniversary Sweepstakes is open to legal residents of the United States and Washington D.C., excluding Florida, New York, Rhode Island, Puerto Rico, and all other U.S. territories, and where restricted or prohibited by law, who have reached the age of (18) eighteen in their state of residence by February 24, 2016.