Added on Tuesday, August 25, 2015 in Uncategorized

In order to promote the Madden NFL 16 game, now available at Walmart, Electronic Arts and Snickers are joining force to bring you the Play The Playmaker Sweepstakes at PlayThePlayMaker.com! 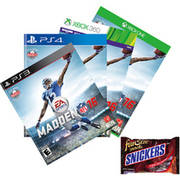 Don’t want to buy Madden NFL 16 but still want to be entered into the Sweepstakes? Send a 3″x5″ card with your full name, complete address, phone number, date of birth, and email address to: Play the Playmaker.com Sweepstakes, 4895 W. 147th St., Hawthorne, CA 90250.

Regardless of the method used to participate, entries will be accepted only from August 24, 2015 through September 30, 2015. No more than one (1) entry per receipt, per person during the entire Sweepstakes Period. Offered and open to residents of the 50 United States and the District of Columbia who are 18 years of age or older at time Sweepstakes begins and who had Internet access as of August 17, 2015.

Electronic Arts and Snickers will send the Grand Prize Winner and his/her guest to Phoenix, Arizona where they’ll have the once-in-a-lifetime opportunity to play Madden NFL 16 with Patrick Peterson, Defensive Back of the Arizona Cardinals! The Grand Prize consists of a trip for two (2) to Phoenix, Arizona and includes roundtrip airfare for two (2), hotel accommodations for 3 days/2 nights, $500 spending money and more!

Here is what Patrick Peterson had to say about the Sweepstakes on Twitter:

#P2Nation! Earn your Playmaker status. Win a chance to play against me in person on #Madden16 http://t.co/7IqOCq2Fgx pic.twitter.com/q1pb4hD0gC

Ten (10) First Prize Winners will each receive a custom Madden NFL 16 Xbox One console and a signed football. Plus, five (5) other winners will get signed memorabilia from the NFL team of their choice!

Are you ready to be the Playmaker? Enter now at PlayThePlayMaker.com for your chance to win!