Like to peel and win? From September 25, 2014 to November 12, 2014, peel off the top layer of a game piece found on a Jack’s Munchie Meal and you’ll have 1 in 4 chances of winning cool prizes like free food, flight vouchers, concert cash, free food, gift cards, FREE FOOD ! Visit jacksmunchiepeel.com for all details about the Jack’s Munchie Peel Instant Win Game or read below to get started !

First, you will need a Game Piece to participate. There are two (2) ways to obtain one, while supplies last: 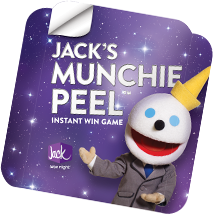 Once you have a Game Piece, peel off the top layer to see if you are a potential instant winner.

If you are a potential winner, your Game Piece will include instructions on how to redeem your prize.
If it is a Jack in the Box food or beverage prize, you can redeem it at the Jack in the Box restaurant.

If it is a non-food prize, it will include a prize code.

How To Enter Your Prize Code

Got your a code found on peel-off game pieces on select Munchie Meals packaging from Jack in the Box handy?
Visit jacksmunchiepeel.com and click on “Enter A Code”. Connect with Facebook or complete all required fields and click “Register”. Then, enter your 10-digit code without any dashes or spaces.

There is a limit of three (3) plays per person per day during the Promotion Period, regardless of method or combination of methods of play.

In order to play and win, you must be 13 years of age or older at the time of entry and a legal resident of one of the following states :

SIX THOUSAND (6,000) ELEVENTH PRIZES: Each prize consists of one reward code to activate for one (1) movie certificate redeemable for one admission (up to $13.00 total value) to see any movie at participating theaters in the U.S. (Approximate Retail Value (“ARV”): $13.00 USD.)